This past weekend we had a Valentine’s photo shoot at our house.

ML texted me Friday to let me know there was a pet costume photo contest at his work.  He thought it might be fun… especially if we could figure out a way to work Noah into it as well.  Immediately, this challenge got my mind going.  Since Buddy is the older, grumpier brother (the cat), I decided he would appreciate it if we just left him out of the whole fiasco.  So that left me with Emma (the dog) and Noah (the baby).  I wanted Emma’s costume to be a “no sew” one, since I was running short on time and really didn’t need to spend a bunch of time on a Valentine’s costume for a dog.

With a little looking I came across this idea… A Cupid’s Arrow Carrier. 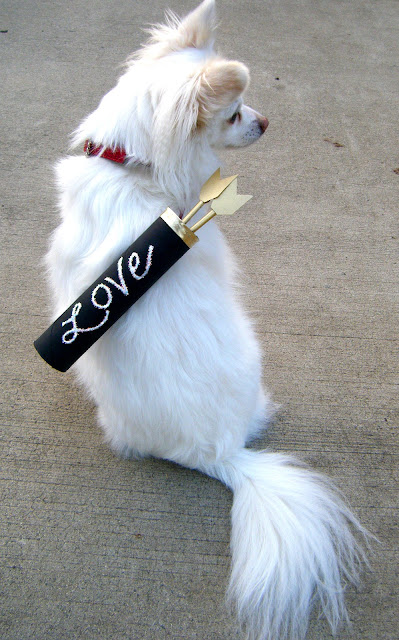 It seemed fairly simple.  Plus, I already had all the supplies on hand!

Because my costume needed to fit a yorkie, I opted for an empty roll of toilet paper instead of an empty paper towel roll like the website called for.  Thankfully, we had just finished a roll that morning, so I had an empty one on hand.

I started off cutting white copy paper to fit where it could wrap around the toilet paper roll.  Next, I practiced writing “Love” on a scrap piece of paper.  Once I had one I liked I placed it underneath my piece of paper and traced it with a pink marker.  I’m just not neat enough to start off writing it directly onto the paper I plan on using.

I guess I caught up in the project and didn’t take any more pictures until I had the costume completed.  But while the glue was drying, I used the same pink marker to color the chopsticks.  Then, I made a stencil on copy paper for the arrowheads and tail of the arrow and traced each stencil six times.  I colored them all pink to match the chopsticks, cut them out, and then glued them on.

The tricky part was trying to figure out how to attach the carrier to Emma.  I needed it to be fairly secure because what yorkie isn’t afraid of a carrier with arrows in it on her back?  So I wrapped a pipe cleaner around each end of the carrier and then tied it onto an old collar.  I then attached it to Emma, basically like you would a sash.

I’m not gonna lie… she was a little freaked out at first.  I let her get used to wearing the carrier and then placed the arrows in it (Baby Steps).

Next, with the help of a Boppy and spare sheet, we set up our photo studio.  Unfortunately, it took me a good part of the day to make the costume since I had to work during feedings.  So we ended up with afternoon sunlight… not the best.  Which is why there are a few shadows in the pictures.  I still think they turned out pretty cute though.

15 thoughts on “Cupids and Arrows and Hearts, Oh My”